After a seven-year hiatus, the 'Dagleish Boys' are back with a SOLD OUT concert in the intimate Harrison basement on Friday February 24th!

When John Dagleish was invited by 'Room One' to host a couple of gigs - in the style of a New York Greenwich Village Cafe - above the Arts Theatre in London's West End, he shared an evening with his dad, and 'Blood Harmonies' was born. The set list reflected the Dagleish's taste in songs and singers - traditional and contemporary and included some of Steve's originals. Both John's solo and the first 'Blood Harmonies' gigs sold out quickly and 'Room One' invited son and father to stage extra shows. Their second 'duo' concert was recorded on Tuesday 16th February 2016, in front of an intimate and enthusiastic full house, on a wee Tascam DR07 . . .

"Separately Steve and John Dagleish are talented artists, I’d had the pleasure of seeing Steve last year in Saltburn as part of a folk night at The Earthbeat Centre and John, I had watched many times grace the stage as Ray Davies, in the hit musical Sunny Afternoon; so I knew seeing them combine forces would make for a unique occasion indeed ..."

"It’s clear that father & son have a very good relationship; having little chats between songs and teasing each other, but quite obviously enjoying themselves & sharing a real love for the music they chose to perform. Sometimes you can feel like a professional musician has just turned up to earn their money, do the job & go – not these Dagleish. Their passion for the music was there for all to see, and absolutely infectious." 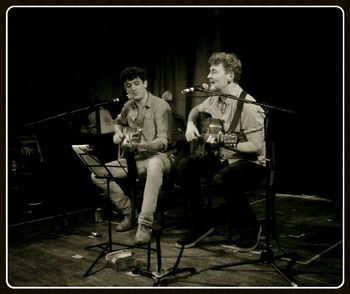 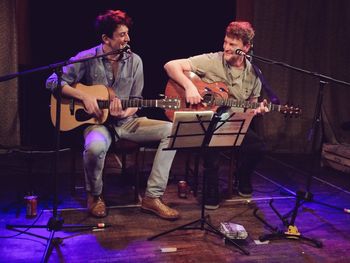 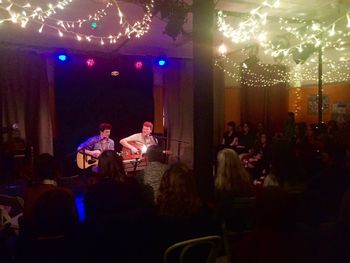